From the depths of the sea we emerged once more – Science Hack Day Berlin 2018 was a blast. This year we explored Motion.Lab Berlin in Treptow with a giant bus inside an even bigger hall. And we were not alone – over 60 hackers cut with lasers, printed in three dimensions, coded, soldered, assembled, planned and constructed ten amazing science hacks. And now it is time to have a look at them. A big THANK YOU goes out to everyone who joined during the weekend – you are the best.

Riding a bicycle can be dangerous in a city like Berlin. Overtaking cars are often too close for comfort. The team designed a distance measuring setup on the back of a bicycle to trigger a frowning or a happy face facing behind. The idea is to discourage drivers from overtaking too close by providing a constant visual feedback without the need of an input by the cyclist.

Building a device that measures distance from a bike to nearby (approaching) cars and signals if other drivers come too close. 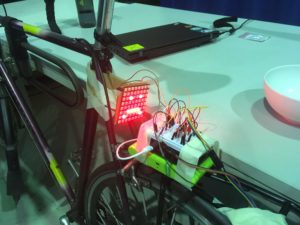 Kati recently had a brain MRI and she brought the data set on an ancient piece of data storage – a CD. After finding a suitable reader she and her team explored the data in different ways. They came up with an installation featuring a hologram brain scan projection and a sonification of the three dimensional data set.

A DIY “holographic” visualization for exploring Kati’s recent MRI brain scans – or any MRI scans for that matter.
The MRI images have also been auralized and turned into a sculpture. Take control of your own medical records and make something creative out of them!

Do you want to experience the beauty and bliss of Berlin public transport in the comfort of your own home? Then Endstation is the right hack for you. The board game offers a new take on the public transport map which is laser etched onto wood to become the game’s surface. The player try to reach their destination without being troubled by ticket controls or Berlin party people.

A racing boardgame, based on the Berlin public transport system, in which players aim to become the first to arrive at their destination. The purpose of this boardgame is to entertain and educate all participants. Moreover, it can serve as a team building exercise with real life value for many international citizens who flock to this vibrant city.

If two people are physically and emotionally close to each other their heart rates can sync up. The team wants to give that same sensation to complete strangers by using heart rate sensors to detect each person’s heart rate. The heart rates are then signalled visually and haptically to the other person and a piece of code detects whether or not the two pulses get in sync.

A hardware and software experiment to get strangers to synchroinze their heartbeats. The purpose of the experiment is to build trust, and also to see how much we can influence subconscious physiology with visual, sonic, and haptic feedback. Other studies have shown that we can influence heart rate through music, and that trusted partners can synchronize many processes, but no one has achieved this effect with strangers (or achieved rate or phase synchrony). We’ll probably fail but have fun doing it.

Mushrooms are an excellent source of nutrients. As a way to make them available to everyone the team created a mushroom micro farm to create the perfect growth conditions for the funghi to survive. They used a combination of ventilators, foggers and electronics to adjust temperature, moisture and oxygen availability to optimal levels.

Home mushroom production has a lot of advantages. Mushrooms are the only vegetarian food that can produce vitamin D. Our modern Lifestyle, especially in Cities, reduces our exposure to sunlight, so UV radiation is not sufficient for vitamin D synthesis.

With our Open Mushroom Micro Farm, you can be your own producer of yummy fresh & tasty Mushrooms. You can harvest aromatic fresh mushrooms and help to mitigate food wastage – You only pick what you need …

Although it feels like the time should be up to underpay women it sadly is not the case. Depending on the country, women are paid considerably less, often for the same work. The team came up with a unconventional clock to illustrate the issue. The clock runs slower from 9 until 5 every day according to the respective gender pay gap. After work hours the clock runs faster to make up with real time until the next morning when it slows down again.

To show how much more women have to work than men in order to get the same amount of money, we create a clock showing their perspective of time: During the working hours, from 9 to 5, this clock is going slower than usual clocks, indicating that when men leave their work place at 5 pm women still have to work to get the same payment.
After Female 5 pm, our clock will start running faster until 1 am, as their free time is passing obviously faster, and it will run with a normal speed from 1-9 am.

The pH of your urine can be meaningful to monitor your health. However, automated monitoring systems are expensive and technically complex. The team tackled the problem by writing sophisticated code that tracks a standard pH measuring strip in context of the reference chart, compares the colours and logs the pH. This reduces the time to read the pH value of the measurement strip and logging it to a minimum.

The reading is however subjective and time-consuming.We developed a script to automatically log daily test strip measurements from a photograph into a spreadsheet. Additionally, results can be shown in a graph to easily observe changes. 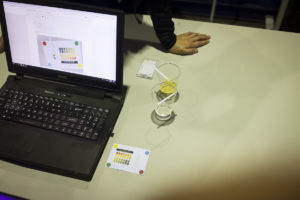 Another experience from public transport brought us this hack: how nice would it be to disrupt the bluetooth connection to one of those trendy boomboxes in the subway? Jamming this connection however turned out to be just as nice as it was difficult. Bluetooth uses a sophisticated algorithm to ensure a secure connection, so even 5 wifi radios firing at full blast could not affect the test speaker. Still, the project is a great learning opportunity, not only about disrupting bluetooth but also about its stability in a crowded frequency band.

Unfortunately, we discovered that Bluetooth music streaming is a very robust protocol. Neither encircling the sender’s smartphone with disturbing wireless channels nor the receiving Bluetooth speaker could significantly affect the quality of music playback. The maximum distance between transmitter and receiver for trouble-free music reproduction was 20m both with or without Jammer influence.
An effective shielding of the loudspeaker from the data stream was only achieved by completely wrapping the loudspeaker in alumnium foil. Even then an almost interference-free operation could be detected up to 50cm away from transmitter and receiver.

Today, we are used to the sight of flying drones. When it comes to nautical autonomous vehicles however it is a much less common sight. The team build a prototype of such an autonomous maritime vessel with the final goal to have it go around the Spree in Berlin in a big, self-steered circle.

The aim of our hack was to build a small autonomous maritime vessel that uses a “passive-sail” which aligns wiht the wind-direction automatically and is capable of autonomous navigation. We also  considered long-range connectivity over the ordinary mobile phone network in order to locate and  steer the vessel without range-limitation. The basic “hack”-idea was to use OpenSource hard- and software usually used for multicopter drones, in order to give the boat a brain.

DNA sequencing is one of the staples of molecular biology. Despite the advances in recent years, sequencing machines were still big and expensive to run. With the advent of nanopore DNA sequencing technology both of these issues are addressed: a nanopore sequencer is not much larger than a USB drive (and also plugs into a computer via USB) and its consumables are much easier to get a hold of and handle than those of conventional sequencers. The team attempted and succeeded in isolating human DNA and sequencing it in the time frame of a weekend on an improvised lab bench. And then they turned the sequence data into music that could be played next weekend at Berghain.