The SHD Berlin organizing team consists wholly of volunteers from the world’s of science, design, IT, engineering, communication, and the intersections between.

If you’d like to get involved and join the team as as volunteer organiser just get in touch! Working in this project can be a great way to get in touch with interesting people, projects, and organisations in Berlin and in the wider science hacking scene and we’d be happy to share it with you. Write us at [email protected].

Tap into our experience and expertise

Science Hack Day is a global, open, volunteer-run project with open source instructions that’s all about spreading grass-roots empowerment, collaboration and interdisciplinary innovation. We love to see projects that share this ethos popping up around the country and are really happy to offer our advice and share our experience. We have many years experience in running successful participatory hacking events and a strong community.
If you’re launching a grass-roots volunteer-run project we’ll be happy to help you as best we can for free. If you’re organising as part of your dayjob we’d be happy to consult or discuss opportunities for collaboration. Just get in touch! [email protected]

Aravinth is a Community Builder, New Media Artist and Embedded Systems Engineer with 15+ years of global experience and he curates communities in the domain of Startups, Sustainability, Education and Art, in Europe, Africa & Asia. He also co-founded 7 Startups & Social Organisations in the sector of Education, Agriculture, Sustainability & Innovation, in Germany & Asia. Furthermore, he researched at 4 academic Research Institutions in the field of IoT, Autonomous Vehicles, Humanoid Robotics & Machine Learning, in Berlin.
aravinth.info
Giulia Paparo
(2014 – 2017, 2019)

Trained philosopher of science, trying to live in between philosophy and physics. Sometimes wishes to have been born at Galileo’s time, when philosophy and physics were still considered one. While waiting for the invention of a time machine, experimenting Science Communication as a way to enthusiasm everyone into the philosophical meaning of science, and the scientific use of philosophy, and maybe a time machine won’t be needed anymore.
@giu_pap
Kati Hyyppä
(2017, 2019) 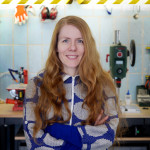 Former designer and current DIY enthusiast, who likes to make things with electronics, cardboard, glitter, yarn and everything in between. Lives mainly by giving workshops, but makes also playful installations and objects. Studied originally cognitive science and has ever since maintained curiosity for science and exploration.
katihyyppa.com
Kaya Kise
(2019) 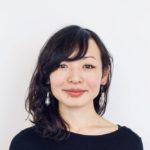 UX/UI designer with an extensive background in artisan crafts and creative education. Loves detailed and thorough observations on cultural and behavioral diversity, which led to her living in 4 countries across 3 different continents. Strives to be an empathetic intermediary between people and technology by creating seamless, efficient and memorable experiences.
Ramin Soleymani
(2013 – ) 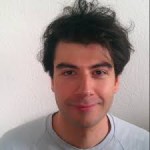 Creative technologist and media artist. Worked in computer science research for a while, before starting to dive into open education and the hacking culture of berlin. Is convinced that the ivory tower of science will crush if you just drill long enough at the very same spot with your little finger.
@ramin__

2 Responses to "Who we are"