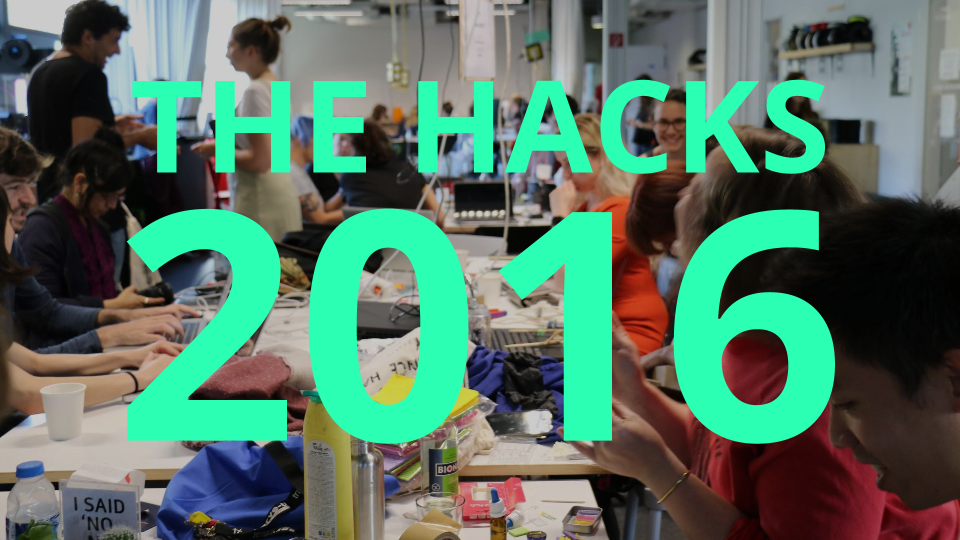 More evidence in support of the intergalactic hacknomenon, Science Hack Day Berlin 2016. Documentation collected from our hackathon etherpad plus other sources. If you were there, experienced it for yourself, and have more proof to share, comment below or send it over to [email protected]. THANK YOUUUU!

Team: Morris, Stefan
A simulation of a world with creatures. The world is a 2D screen. A creature is a polygon.

All edges of a polygon have equal length. Polygons can be born into the world. Gaps between Polygons could be new Mutations of formerly unknown Polygons.

Team: Doro, Marja, Joram, Manuel
We want to gather excess energy from walking or running. We constructed three different linear alternators that all move a magnet through a tightly wound copper coil. A LED is powered by the linear alternator and flashes up when shaking the device. When attached to a runner the LEDs light up with every step. The design is simple, and the parts can be salvaged from other devices. The tubes in one of the hacks are made from rolled up paper and the end caps are made from wood. Another tube was salvaged from an old electrical installation tube. The coils were wound by attaching the tube to a battery powered drill and slowly rolling up the copper wire. Total cost of one build is somewhere between 5 and 10 EUR for the copper wire and the magnet. Reclaim the wire from an old coil will reduce the costs even further.

With some further iteration we believe that it could be possible to charge a battery while running, effectively providing an off-grid sustainable power source for small scale applications.

This little hack is great to build your own running light at low cost by reclaiming materials you might already find on your fridge (magnets) or in an old printer (coils). The key for an efficient system is a strong magnet and a narrow but tightly wound coil with as many turns as possible. 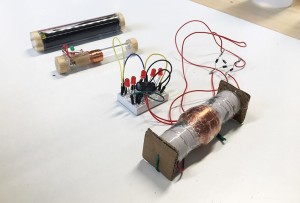 Team: DARSHA HEWITT, DENNY PHANE, NADJA BUTTENDORF
Let’s make fiction science again! In the Sci-fi movie ‘Total Recall’ from 1990 the secretary changes the color of her fingernails by tipping on her nails.OMG!

We experiment with an universal indicator paper, a ph-indicator to test materials for acidity, you can buy in every pharmacy. The colours from yellow to red (1-6) indicate an acidic solution, colours light blue to dark blue indicate bases (9-11) and green colour indicates that a solution is neutral. With a superalkaline solution we changed the color of the paper from yellow to blue. We found a way to RECALL the previous yellow color by dropping some superacidic solution on the paper.

We also invented the PISS NAILS!
A very healthy tool to test the pH of your urin and check if your hyperacidity.

Team: Arne Jenssen, Sascha Held, Georg Buchner, Markus Scheider, Tim Baeumlisberger, Moritz Ebeling-Rump
The augmented cooking bot attempts to solve the problem of overcooking and undercooking of food. We use temperature sensors and feed that into an algorithm that tells you when to flip the pancake and when it is done and it also manipulates the temperature of the oven by turning it on/off.
We have done a lot of experiments with
— open source Perfect pancake —
59 grams
236 °C
1m 20s flip
1m 40s second side
Recipe: “eigen pancake” [1]
190 g flour
25g sugar
10 g baking powder
3 g salt
25 g butter
330 g milk
80 g eggs
[1] “Cooking with Geeks” – Jeff Potter – Oreiiley 2013 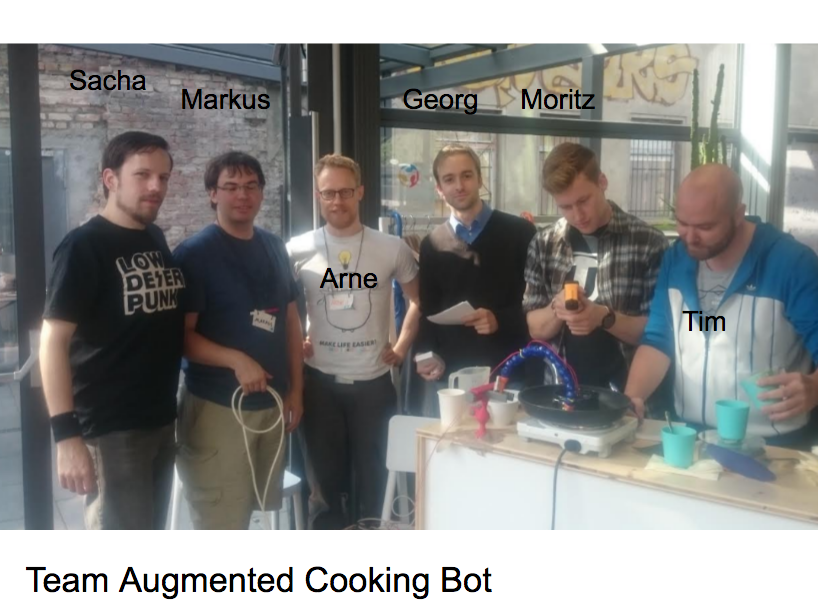 Team: Pablo, Maja, Chiara, Nenad, Klara, Pen, Eeva-Liisa, Franzi
This project addresses the field of affective sciences in humans and animals. We are interested in the way the mankind extrapolates human centered academic terminology (E.g. from psycology) to the natural world. We wanted to illustrate this by linking the output of face/emotion recognition software to sounds made by animals experiencing an “equivalent” emotion. A very basic example would be the trigger of an angry dog sound when the camera detects an angry human face. We built a strong multidisciplinary team comprised of specialists on many fields ranging from programming to arts and science. We used commercial software already available for face and emotion recognition and adapted it to our needs with the use of programming and hacking. In regard to the sounds, they were obtained from scientific studies done by researchers while studying “animal emotions” in the lab and the field.  The final hack hallmarks an interactive activity showcasing scientifically relevant data and state of the art  technologies. 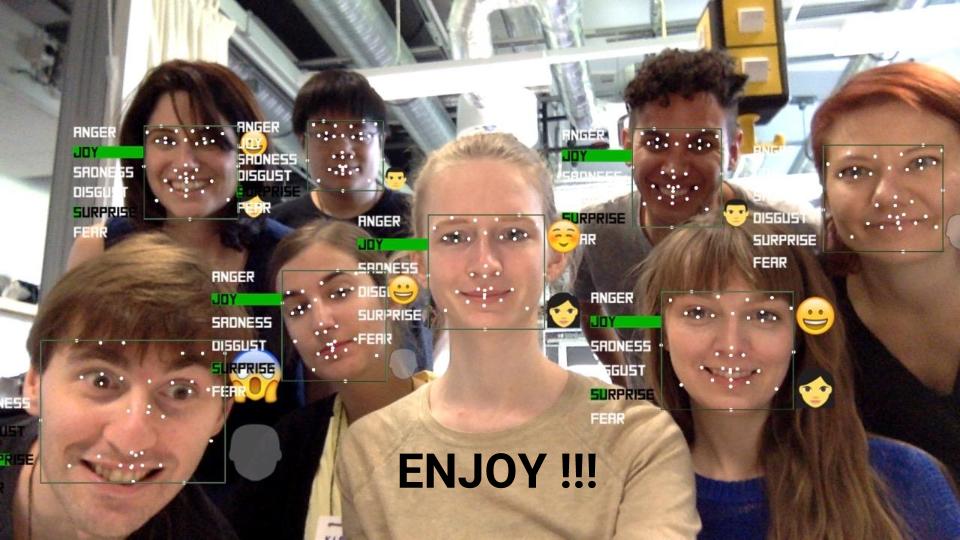 Team: Hélène Trommelen, Gene Kogan
For this project, a small interactive game was created  in which the user can get acquainted with some of the concepts of infections, such as the risks,symptoms and ways to prevent it. The format of a game is much more interactive compared to a textual format of a traditional information folder. Including gamification in the format imposes incentives to engage in the consumption of information. By creating a tool that adresses the understanding of their situation it can serve as a tool for creating an empathy path between the docter and patient perspective. In that way, it can serve as an affective mode of understanding. Positive reinforcement through gamification and role play empowers patients to embrace a challenge and become a participant rather than a wittness in the fight against disease.

The goal is to 1. make patients introduce patientsto these concepts in an accessible way 2. Make them feel comfortable with thedisease perspective 3. Create curiosity to participate in the treatment by creating an empathy path betwen the patient and the physician. 4.Motivate them to ask questions.

Team: Gal Schkolnik (@GSchkolnik), Alessandro De Simone,Richard Höchenberger (@RHoechenberger)
Some bacteria, found in mud from your local lake, can produce electricity, by eating sugars or organic acids, and anaerobically donating their terminal metabolic electrons to an electrode exposed to air. In simpler terms, if we physically separate these bacteria from the air, but connect them to it via a pice of wire with resistance, we’ll get voltage and current, i.e. electrical power. The plant added to the system will supply the sugars via its roots. 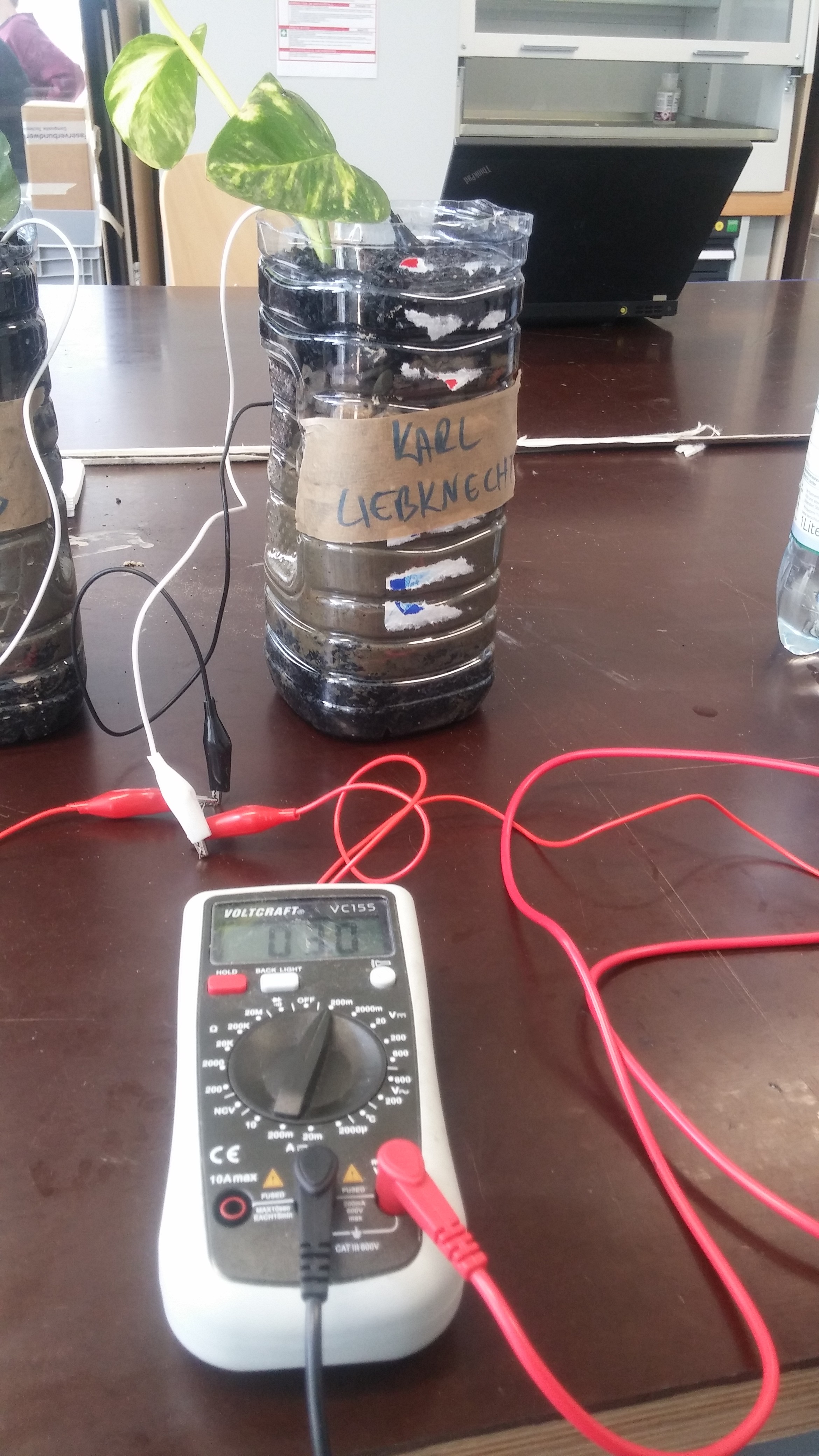 Team: Benjamin Skirlo, Giulia paparo, Johanna Jaskowska, Philip Silva, Thomas Heidtmann
Experience Quantum Physics through Virtual Reality. One doesn’t directly see quantum mechanic effects but using VR it’s now possible! We visualize the electron probability density and thus the possible states in the hydrogen atom through funny objects. The idea is that an observer would then trigger that a certain state is chosen. 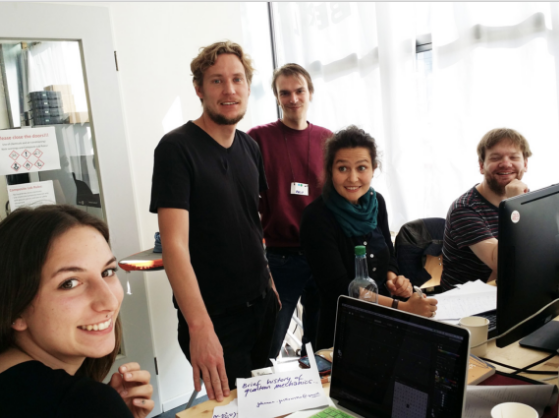 Team: @teoguso- math maker, @meredityman- fearless cheerleader, @sveinb- radio mercenary, @nolash- enigmatic VR prophet, @xmunoz- software wench
We scrapped together a passive radar collection system using 2 TV tuners with anntenae, a USB hub, and some custom software. The amount of data that these tuners collected proved to be much more than we could process as mere mortals, but we did make a valient attempt to implement a custom cross correlation function to deduce the dopplar shift and distance of radar contacts, before eventually settling on using some built-in octave methods. We were also able to produce a proof of concept for transmitting finished radar matrix vertices to Unity binary via socket. More information about the tools that were used and source code and be found in our github repository, linked below.
Links: https://github.com/teoguso/daredevil
Presentation: https://github.com/teoguso/daredevil/blob/master/README.md

Team: Nikolai ([email protected]), Magdalena ([email protected]), Michael ([email protected])
We created an expandable and hackable arduino wearable with a wide variety of sensors.
The device includes:
Pulsesensor
UV lightsensor
Visiblelight sensor
Ambienttemperature
Humidity
Accelerometer
All this in a compact and batterypowered form.
The best part: You can programit yourself, create events based on context, interact with the environment andcharge it with your phone power supply.
LINKS :
TheDevice: https://enhance.dyndns.org/index.php/s/8Da7caGXMjwWSVn

Online Version of the tool!

Team: Rachel, Kati, Rick and an honorary mention to Denny from the nail club for future ladies.

We wanted to produce an artistic visualisation of the salt content of various bodily fluids. Does salt concentration change during the day? How does it compare between saliva, blood, sweat, tears and urine? With our machine you can measure it yourself at home and produce an image on cyanotype papers. Electrodes are introduced in a liquid sample and the salt concentration controls the aperture over the photopaper. The paper is exposed to light and the resulting size of the image reflects the salt concentration!
diy lenses: http://www.instructables.com/id/Making-Custom-Lenses/ 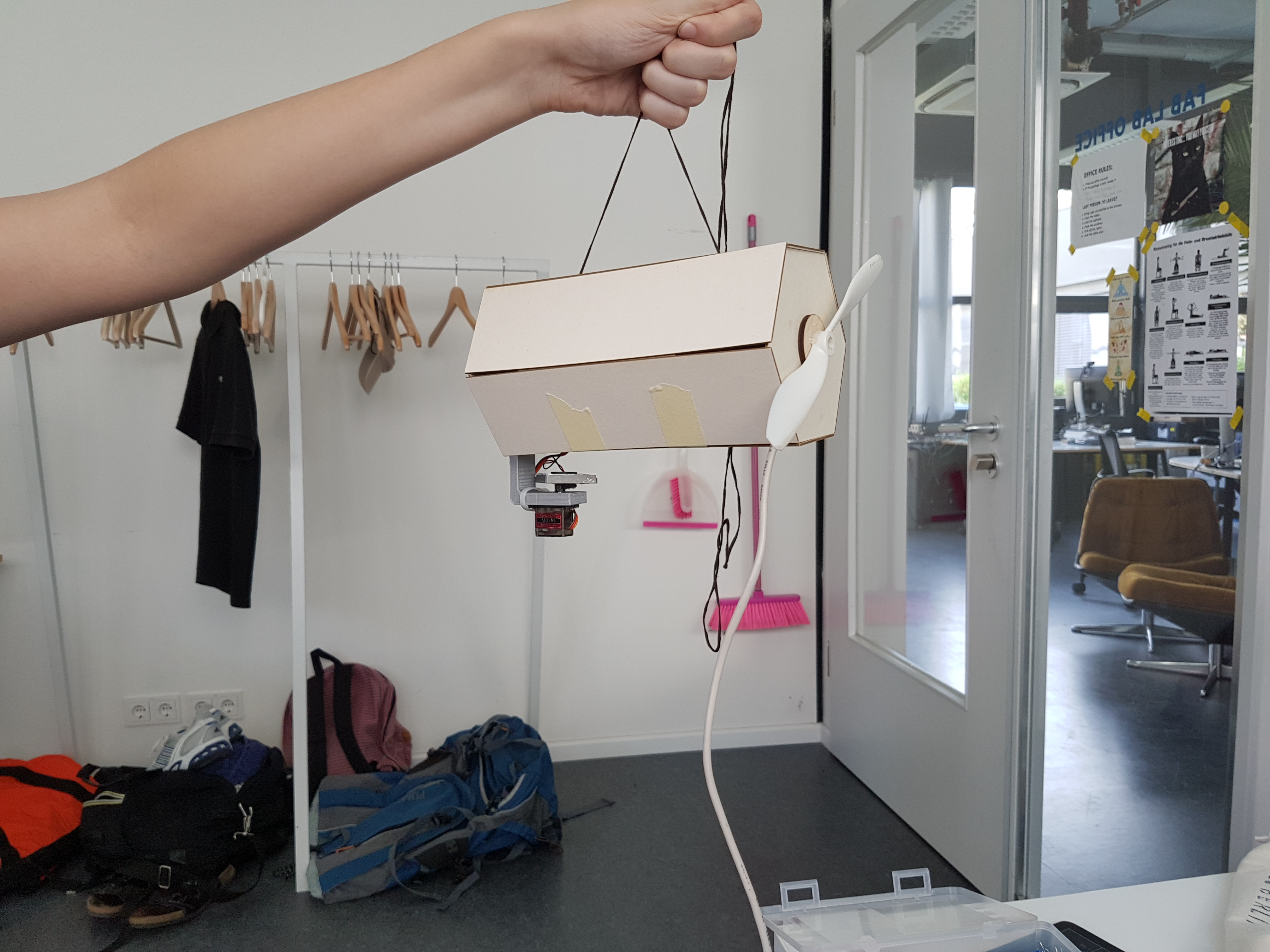 Evaluation and fighting against the menstrual taboo in order to promote: women’s health awareness, women empowerment, biomedical research and acquisition of data related to womens’ health.

Survey: https://julian116.typeform.com/to/AzJMQP
(credentials to log in are in Gitter)